About tool:
Tool made to improve gameplay for NBA and PES 2014. 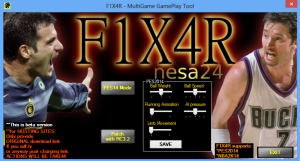 ALWAYS make BACKUP of your exe

How to remove:
Just delete exe with nesa24 Gameplay.exe

68,599FansLike
4,448FollowersFollow
© 2021 PES Patch. All text, images and trademarks added here are the intellectual property of their owners.